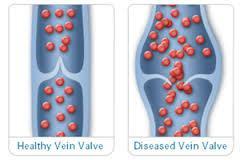 The North Suburbs of Chicago seems an idyllic place. Great schools. Lovely parks. The beautiful state-of-the-art Rosen Vein Care office in The Professional Plaza at Northbrook Court. But despite all the local trappings and amenities, we live in an imperfect world.

The second year of med school deals with learning about medical imperfection; what happens when things go wrong. Here’s a little taste of 2nd year med school for you…a discussion of venous pathophysiology.

Pathophysiology is why doctors exist. Rosen Vein Care exists to fix the pathophysiology of the superficial venous system. I live and breathe the stuff.

The concept is pretty easy to grasp: remember the major players of the venous system in the lower extremities: veins, valves, and pump…then realize that what can go wrong often does go wrong. The final common pathway of all the problems is an increase in the venous pressure in the extremities (venous hypertension). Let’s consider the players one-by-one:

Think of this as “congestive heart failure” of the “peripheral heart”. Decreased pump function→decreased “ejection fraction”(the amount of blood pumped out of the legs and back to the heart)→increased volume of blood remaining in the lower extremities→ INCREASED VENOUS HYPERTENSION. This can be caused by:
–Neuromuscular diseases (can’t move muscles in pump)
–Muscle wasting (used to pump better, now not so much) [Please resist the urge for a “that’s what she said”]
–Deep fasciotomies…or surgical incisions made deep into the muscles that render them unable to be used effectively

Once you start talking about vascular problems what you are really talking about are plumbing issues. Plumbing issues can be boiled down to either blockage/narrowing or leaking. If we used such simplistic terms doctors would never be taken as seriously as they expect to be taken. Therefore we’ve come up with fancy-shmancy ways of saying the same thing. We call blockage “obstruction”. We call the leakage “incompetence”. [If the plumber told us our toilets are obstructed and our faucets are incompetent he’d likely charge us double, G-d forbid]

a) Obstruction: The pump is fine but it can’t get blood past a blockage. Think about:
-clots (call them thrombi to sound fancier still)
-external pressure from swelling, local masses,etc.

b) Incompetence: The pump & “pipes” are fine, but the one-way valves within the pipes are leaky and allow blood to flow back downward into the legs.
-Primary problem: if you weren’t born with valves or the ones you were born with are ineffectual
-Secondary: damage to valves due to
-previous clot
-direct trauma
-dilitation of veins→valve cusps can’t touch to create a good seal

This is the most common form of venous disease and can be due to:
a) Primary valve failure due to
-direct injury
-inflammatory conditions: such as infection or vasculitis
-superficial thrombophlebitis: many patients suffering from varicose veins have dealt with inflamed clot-filled veins. Are you sensing another vicious circle? Yes, thrombophlebitis in turn can cause valves to malfunction which can lead to worsening varicosities and on & on…until you and Rosen Vein Care do something about it, that is!

So…no matter what factors led to this point. Once there is decreased blood out of the legs→more blood stays behind→ hydrostatic pressure builds up→INCREASED VENOUS HYPERTENSION…which ultimately leads to:
–Failure of valves→reflux “upstream”→perpetuates disease
–Failure of walls→veins become tortuous/dilated→ Varicose Veins (a relatively early manifestation of disease)
–Skin changes: a late and possibly irreversible problem due to chronic inflammation

Here’s a look at what reflux looks like in action:

Well…now we know what happens in the tumultuous course of venous disease that ultimately leads to venous hypertension. After that it is anyone’s guess as to exactly how things play out that leads to varicose/spider veins and skin changes. However, over time, the guesses have been getting better.

Stay tuned to the next episode when Dr. Dave will discuss Theories Old & New.

Meanwhile if you seek answers to your specific vein questions…if you seek refuge from the harsh wasteland of venous imperfection…stop by our little oasis in Northbrook. Call 847-272-8346 to schedule an initial consultation. I can’t promise palm trees and margaritas, but we serve up fresh perspective and sunny dispositions.

When Should I Be Concerned By Varicose Veins?

A series of factors can cause varicose veins. Although they are purely a cosmetic condition, most of the time, they can bring cramping, discomfort, pain, and other symptoms. People that are experiencing these uncomfortable symptoms often wonder whether...

Safe and Affordable Treatments at Our Vein Clinic

If you would like to eliminate unwanted veins that are showing through your skin, you should look at the safe and affordable treatments that are available at our state-of-the-art Chicago area vein clinic. Problem veins typically come in one of two...

Should I Wear Support Stockings After Sclerotherapy?

If you have recently gone through a sclerotherapy procedure, you might be wondering about the best after-care practices. Commonly, support stockings are the first recommendation doctors make. So, let’s learn about them and why they are useful after...

How Long Does It Take to Heal After Sclerotherapy?

Your veins are equipped with one-way valves that regulate blood flow. Sometimes, these valves malfunction and the blood cannot move back up towards the heart. Instead, it stays trap within your legs, causing a vein disease. Sclerotherapy is a medical...

Varicose veins can affect everyone. Although, if you’re a woman, you may be more prone to them. You may not be immediately sure that what you’re seeing are varicose veins. However, there are ways to know if a varicose vein is forming by paying close...