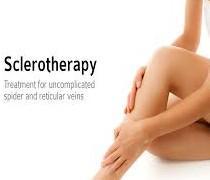 Definitive treatment for spider veins involves injections. Some will claim that superficial lasers or radiofrequency generators can do the job…but, in my opinion…based on experience…I would recommend starting with sclerotherapy first and use those other modalities as a last resort or to treat veins too small to enter with a needle.

Centuries old, the concept of injecting solution into varicose veins in order to get them to scar down and shrink is still a mainstay in the armamentarium of phlebologists. Like thermal ablation, the goal is to achieve irreversible damage to the cells that line the walls of veins, causing local inflammation and ultimately scarring down and resorption of the vein itself. Too little, the body can ultimately heal the damage and allow blood to continue to flow through diseased veins. Too much can allow the sclerosing agent to flow into normal healthy veins and cause unwanted damage.

At Rosen Vein Care, we use sclerotherapy to not only treat larger veins that are not amenable to treatment with endovenous laser ablation, but often use them to treat the very fine telangiectasias or “spider veins”. Using specialized equipment, we can target the reticular veins which feed into the “spiders” and thus deal a “knockout punch” to the root of the problem. It is not uncommon that insurance carriers will cover part of the cost of sclerotherapy once underlying saphenous vein reflux is treated definitively with endovenous ablation. Again, we will work with you and your insurance carrier to help you receive available coverage.
Various types of sclerosants exist, each with their plusses and minuses. In some cases, sclerosants can be mixed with air causing a foam to be produced. Foamed sclerosants allow for an increased surface area for the sclerosant to have an effect on vessels. Foam also has less of a chance of being diluted by blood vs liquid sclerosants and allows you to treat veins of a larger diameter.
Here’s a brief overview of the two most common types of sclerosants used today: osmotic sclerosants, such as hypertonic saline & detergent sclerosants such as Sodium tetradecyl sulfate (STS) and Polydocanol (POL).
Osmotic sclerosants, such as hypertonic saline, damage endothelial cells by dehydrating them. Think of a grape getting turned into a raisin by sucking the water out of it and you’ll get the picture. In addition to dehydration, osmotic sclerosants also denature the cell membrane proteins. This effect seems to occur even when the saline is diluted to a level too low to attribute to dehydration.
Detergent sclerosants are just what they sound like…soap-like substances that, like that famous dishsoap, “”. Just substitute “endothelial cell membranes” (which contain phospholipids) for “grease”…throw in a few cute “scrubbing bubbles” cartoon characters and you can envision all kinds of intravenous shenanigans going on. If you want to be nit-picky, detergent sclerosants destroy endothelial cell membranes via protein theft denaturation…I’m sorry but “scrubbing bubbles” conjure up a more satisfying image in my opinion!
Once veins have been injected with a sclerosant, patients need to wear compression stockings as much as possible. The more the better. Being realistic about it, if you can keep them on during the daytime for 2-3 weeks after your session, you’ll likely do just fine.
As for results of sclerotherapy, I’ve seen statitistics such as 80% of patients clear to their satisfaction after their 1st course. What we tend to see that it generally takes multiple sessions to cover the trouble spots on both legs. We tend to space the treatments 3 weeks apart. Sometimes a “clean-up” session is necessary after the final treatment where we reassess and treat those areas that failed to clear effectively up to that point. Unanimously, patients improve after sclerotherapy. But it’s all about expectations: if you are expecting perfection…you’ll likely be disappointed. If you expect improvement, you’ll be pleasantly surprised! It’s not to say that my OCD-ish personality doesn’t strive for perfection in the challenges I encounter in my life…spider veins included…it’s just that the nature of, well Nature, is to operate by rules so complex and tricky to predict that Perfection is impossible to guarantee.

Results are not instantaneous. This is so important to realize that I’ll say it again: Results are NOT instantaneous. It can take weeks to months to see the final effects of sclerotherapy. Figure it this way: it took years for the stuff you see at the surface to form. Taking some weeks to heal isn’t so long in the grand scheme of things. AND…it’s reality..and that’s the currency I deal in at Rosen Vein Care.

As always, the road to legs that feel and look better starts with a first step of a thorough, one-hour-long consultation appointment with me to determine the extent of your issues and create a treatment plan tailored to your specific needs. To schedule your appointment, call 847-272-8346.

When Should I Be Concerned By Varicose Veins?

A series of factors can cause varicose veins. Although they are purely a cosmetic condition, most of the time, they can bring cramping, discomfort, pain, and other symptoms. People that are experiencing these uncomfortable symptoms often wonder whether...

Safe and Affordable Treatments at Our Vein Clinic

If you would like to eliminate unwanted veins that are showing through your skin, you should look at the safe and affordable treatments that are available at our state-of-the-art Chicago area vein clinic. Problem veins typically come in one of two...

Should I Wear Support Stockings After Sclerotherapy?

If you have recently gone through a sclerotherapy procedure, you might be wondering about the best after-care practices. Commonly, support stockings are the first recommendation doctors make. So, let’s learn about them and why they are useful after...

How Long Does It Take to Heal After Sclerotherapy?

Your veins are equipped with one-way valves that regulate blood flow. Sometimes, these valves malfunction and the blood cannot move back up towards the heart. Instead, it stays trap within your legs, causing a vein disease. Sclerotherapy is a medical...

Varicose veins can affect everyone. Although, if you’re a woman, you may be more prone to them. You may not be immediately sure that what you’re seeing are varicose veins. However, there are ways to know if a varicose vein is forming by paying close...